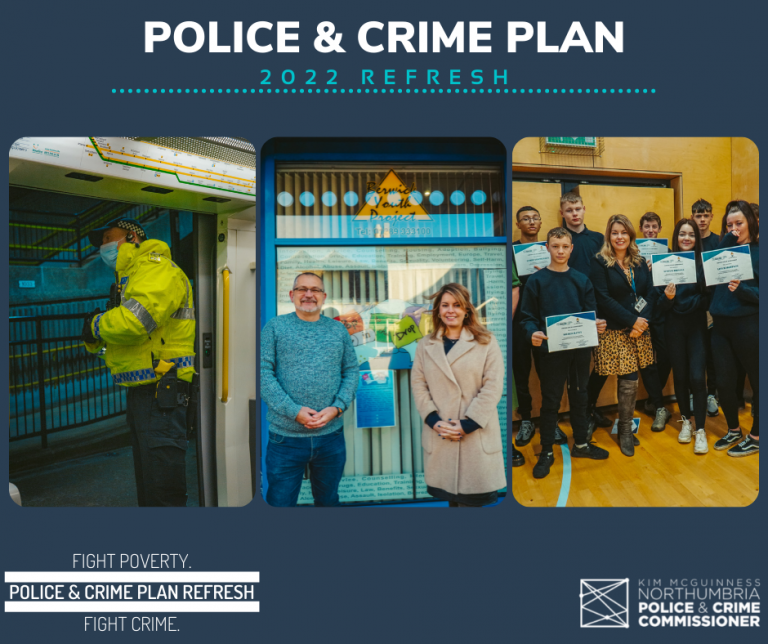 POLICE and crime commissioner, Kim McGuinness, wants to hear your views on safety and policing to help shape her plan to fight crime and prevent crime throughout the Northumbria Police force area.

Thousands had their say, which helped shape the region’s Police and Crime Plan – a plan which sets out the key priorities for the Force. The Force’s performance is then measured against this plan on behalf of the public.

Since being elected as Police and Crime Commissioner in 2019, Kim McGuinness has backed her priorities with action on the ground. Her work has included setting up a Violence Reduction Unit, launching a safety app for public transport users and getting plans in motion for a region-wide ASB task force.

The Commissioner has also delivered on promises around recruitment. She has listened to calls from the public for more police serving in their communities and has worked with the Chief Constable on the Force’s largest recruitment drive to date and says she is proud to have smashed recruitment targets set by Government.

Northumbria Police and Crime Commissioner, Kim McGuinness, said: “When we launched the plan last year – our priorities were clear but it’s crucial that we check in and make sure they are still the right ones.

“Recent years have brought lots of challenges with rising demands and pressure on resources. Also, we see crime change, policing change, technology change and so our priorities have to reflect all this; they have to grow too.

“I’m proud of our police force and how our region came together through the pandemic; there’s a lot of good work happening and I want this plan to build on this and keep improving lives across the region. We want to be doing everything we can to keep you and your family safe.”

Kim added: “For me it’s really important that this plan looks far ahead too. It’s easy to think of policing for the now but I’d urge people to think about long-term, lasting improvements for generations to come.

“To really fight crime we need to look at the causes – what drives people into crime – the poverty, the vulnerabilities and so on – these things we really need to be tackling too. If people are given the best start in life they won’t start getting into trouble in the first place.”

Information from this and other surveys carried out by the Office of the Police and Crime Commissioner, including transport and safety surveys, will be used to refresh the police and crime plan for 2022. The final document will be published in March 2022.